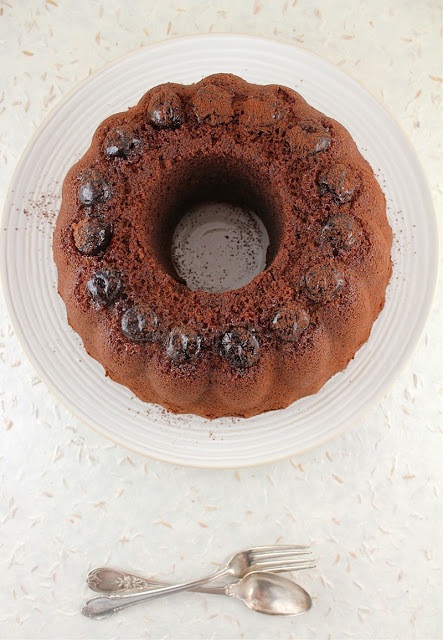 This week, Jamie Schler, food writer and author of the blog Life’s a Feast, shares the recipe of her Chocolate Spice Cake with Sour Black Cherries…

« I am a baker (my husband is the better cook; he is the cook, I am the baker!) and love baking for my three Frenchmen and I love nothing more than introducing them to American baked goods, the cookies, cakes, etc. I think my husband being such an adventurous cook has made me a more adventurous baker and I end up baking more with spices, liqueur and alcohol, and trying new things more often now. But our household is truly a mélange of French, American, Italian and Moroccan dishes just naturally. »

Makes one 9-inch (23 cm) Bundt – can also be baked in layers or in a loaf pan but adjust baking time as needed. 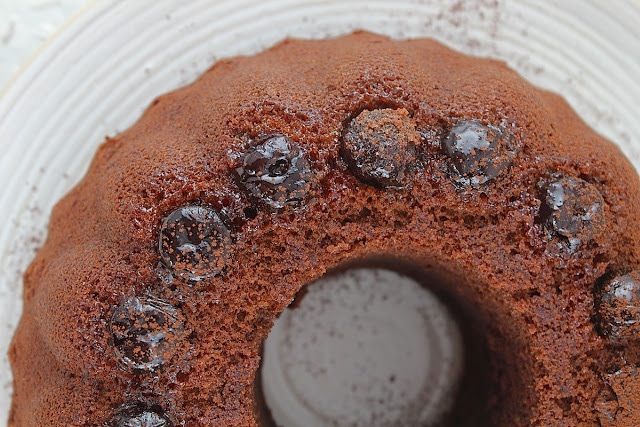 Place the softened butter and the sugar in a large mixing bowl. Using a hand or stand mixer, cream the butter and sugar for 3 to 5 minutes until thick, smooth and doubled in volume. Beat in the eggs one at a time, beating for a minute after each addition to increase the volume of the batter.

Stir or sift together the flour, cocoa powder, baking powder, cinnamon, cloves and salt in a separate bowl.

Add the dry ingredients to the batter in three additions, alternating with the milk in two, beginning and ending in dry, beating after each addition until well blended. Beat in the vanilla as well as 1 – 2 tablespoons of the cherry syrup.

Bake for 45 – 50 minutes (Note: if using layer cake pans or a loaf pan and depending upon your oven, baking times may vary greatly, so begin checking the cake for doneness after 35 minutes.) The cake is done when a tester stuck into the center of the cake comes out clean – or cleanish, with no liquid batter.

Remove from the oven onto cooling racks and allow to cool for 10 – 15 minutes before gently shaking the cake lose and turning it out of the baking pan and onto a cooling rack to cool completely.

Slide the cake onto a serving platter, dust with a bit of cocoa powder and serve. For an elegant dessert, serve the cake with very lightly sweetened whipped cream or ice cream topped with more of the cherries and a drizzle of syrup.

* For the Rum Roasted Cherries:

Place the whole cherries – pitted or unpitted – in a small roasting pan and toss with the sugar and a pinch of salt. Place in the oven and roast until the cherries start to release their juices and the sugar melts and begins to caramelize. This will take about 10 minutes but watch the cherries very carefully, as the sugar may start to burn.

Place the roasting pan on the stove over a very very low flame and stir and toss, gently pressing the cherries with the back of a spoon or spatula just to release a bit more juice. Toss and cook gently but very quickly – only a minute or two – until the last of the sugar has melted and a thick, cherry red juice forms. Remove from the heat and allow to cool to either warm or room temperature. 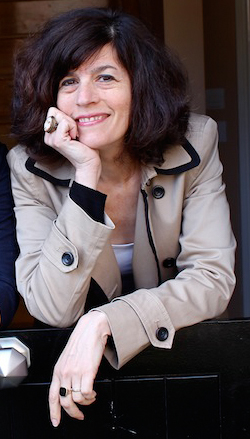 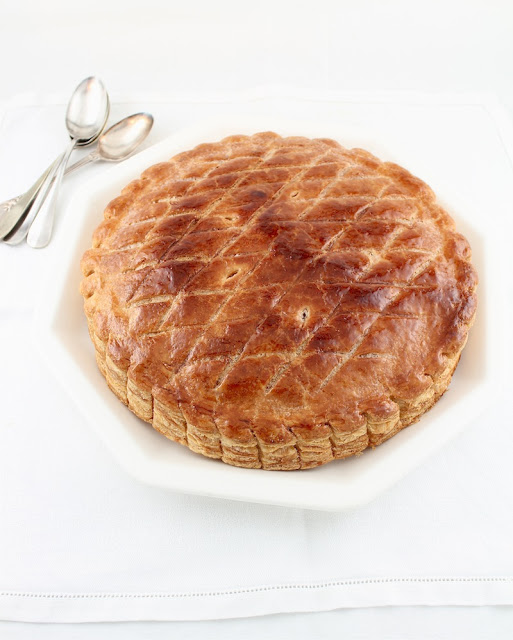